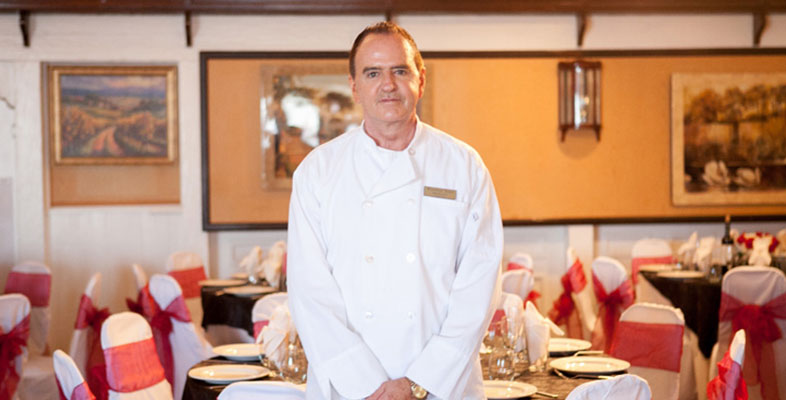 After being opening Chef at the Ritz Carlton, Chef Daniel opened The Westminster Manor Catering & Banquet House in 1991 and was the operating Chef / Proprietor there for 25 years. Chef Daniel is now bringing his 5-star culinary cuisine and event planning services to Casa de Lago in Orange, CA. His Yelp reviews of The Westminster Manor will establish his clients’ 5-star reviews of himself and his staff.

Chef Daniel Lyons is a Master Chef, graduating from the Culinary Institute of America in New York. After graduating from the Culinary Institute of America, Chef Daniel Lyons served his one year European apprenticeship at the Hotel Europa in Lucerne, Switzerland, Upon completion of his culinary training in Europe, Chef Daniel return to the United States and finished his 3 year American apprenticeship at the Omni International Hotel in Atlanta Georgia. He has worked as Garde Manager and Banquet/Pastry Chefs in 4 and 5 star hotels including the Hyatt Regency in Atlanta and Newport Beach. He was the opening Banquet Chef of the Ritz Carlton, Laguna Niguel. During Chef Lyons working Chef Hotel days he prepared 7 course sit down/buffet dinners for President Carter in Atlanta and President Ronald Reagan in California.

In his 38 year culinary career, Chef Daniel Lyons has prepared and coordinated events for such notables:

Chef Daniel Lyons has made several appearances on the Food Network. Most recently, Chef Daniel received one of the most prestigious awards from his Alma mater Culinary Institute of America in Hyde Park, New York, saluting him along with 4 other 1976 graduates as the most successful. He received the certification of Master Chef from the 5-star Culinary Institute of America Culinary School.

Hire Chef Daniel to cater your wedding or banquet!

View complete pricing and menu selections offered by Chef Daniel for your event at the venue of your choice.

Come by my bistro kitchen in Garden Grove, CA to taste some of the foods I am preparing for that day at no charge. It will be my pleasure to prepare a combination of appetizers, main courses, and side dishes for all of you to taste!